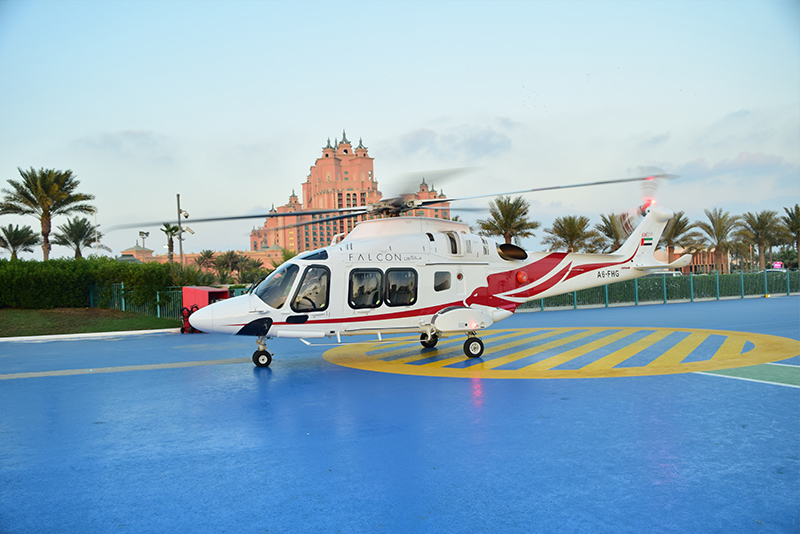 Abu Dhabi’s Falcon Aviation (Stand 791) has a steady stream of deliveries coming in the next four years and expects business aviation to pick up, given the growth potential in the market, according to Capt. Ramandeep Oberoi, COO of Falcon Aviation.

“During EBACE this year Falcon Aviation signed preliminary contract to be launched to customers for Airbus’s H160, a VVIP [-configured] helicopter under development and due for delivery in 2020,” he said.

“We have a second [Leonardo] AW169 in VIP configuration on order, to be delivered by the end of 2016. We also provide MRO, CAMO and hangarage services to two AW109s and two EC130s.”

Falcon also has two Pilatus PC-24 aircraft on order to be delivered in 2019 and 2020. “We also provide aircraft management services including MRO, CAMO and hangarage to one G550 and one G450.”

Capt. Oberoi said the three main helicopter OEMs present in the region were Bell, Leonardo and Airbus Helicopter. “We were mainly a Bell 412 operator until now. The Bell 525 which is under development will have Abu Dhabi Aviation as a launch customer in the region.”

New oil-and-gas regulations are being enforced by several international oil companies. Falcon is replacing one Bell 412EP with a newly introduced AW169 for Total, operating in Abu Dhabi’s ABK field.

“With the low oil price situation, one way to cut costs and bring in efficiency is to introduce new helicopters with new technology. This is the reason we have introduced AW189s and AW169s. However, these fleet changes have to be done at a pace the oil-and-gas market can absorb.”

He said that while some fleet changes were recommended, these were being undertaken slowly. “In offshore oil-and-gas, many changes are happening to make operations safer, efficient and more cost-effective. We are part of this process. We are working with the oil companies to achieve this,” he said.

“For example, the 19-seater AW189 may actually bring costs down. Costs per nautical seat mile are much lower than some of the other helicopters currently in use.”

He said business aviation in the region had a slow summer. “This year, like others, had a low for two-to-three months for our business-jet charter operations. Now the market is catching up again. The charter market is tending to come back slowly. We are trying to sign block agreements. Technically, there is a slowdown, but the market is reviving itself. We see growth potential in this business.”

Falcon is to be a major player at the Dubai World Central (DWC) Airport VIP Terminal. Capt. Oberoi said the soft opening for Falcon’s FBO was to take place November 30. “We will showcase our new VIP FBO at MEBAA.”

“It is true that the FBO handling business has not been a mainstream activity for Falcon, but it is a very natural extension of our existing business,” said Pauline Smith, Falcon’s FBO manager at the VIP Terminal.

“We have for many years been supporting fixed-wing and rotary aircraft operations, both in terms of [maintenance] and passenger handling so it’s a natural development to add VIP handling to our portfolio. Given our longstanding position and connections in the UAE, Falcon is an ideal partner to be based at DWC.

“The best FBO operations are able to support clients across a whole spectrum of needs. Falcon, of course, has a long-standing established base in the UAE, so it has extensive experience in immigration, security and handling. And its large base-maintenance capabilities at Al Bateen mean we can offer customers a unique assurance that if anything goes wrong we can assist and resolve any problems,” she said.

“The reverse is, of course, that FBO clients using these services will drive our revenues and grow our business and importantly project the Falcon brand beyond the UAE.”

Capt. Oberoi said he expected the Falcon hangar at DWC adjacent to DC Aviation-Al Futtaim to be complete in mid-2018. “We obtained our building permit by the end of September. The contractor has mobilized the team. We are starting now and the project will be completed in 18 months as per the project plan.”

He said Falcon would provide backup to GI Aviation when its aircraft become operational. “The [Pilatus] PC-12NG [single-engine turboprop] is to be operated by this company in Abu Dhabi and Dubai. We are providing them with MRO services as we are the AMAC (Pilatus) service agent in the region.”

Falcon will also showcase its MRO with aircraft line maintenance at MEBAA. It is an authorized service center for Embraer and authorized warranty center for Gulfstream.

Falcon announced in October that Pauline Smith joined the company as FBO manager, ahead of the opening of the company’s new FBO here at Al Maktoum International [Dubai World Central] Airport—aka Dubai South. Smith joined the company from Cambridge, UK-based Marshall Aerospace, where she was customer services and terminal manager for four years. During that time she oversaw the establishment of a new FBO at Birmingham International Airport and a new passenger terminal for business aviation passengers at Cambridge Airport. Smith has also worked for Harrods Aviation, ExecuJet Middle East and Al Bateen Executive Airport.