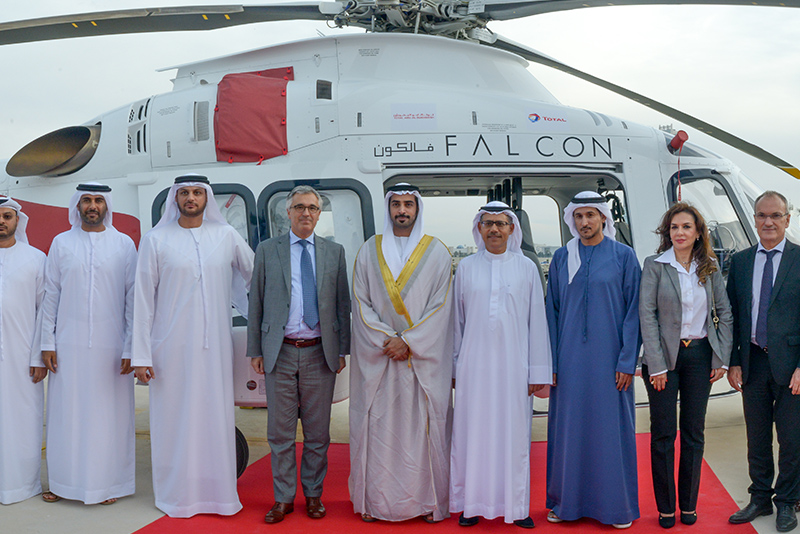 Falcon Aviation is the first operator in UAE to use the new type and the first customer worldwide to operate the aircraft for offshore oil and gas transportation. This AW169 will now be used to support oil & gas operations in Abu Dhabi for TOTAL ABK. Falcon Aviation has placed orders for two AW169s, the second being in a VVIP transport configuration.

The introduction of the all new AW169 into their fleet expands the range of Leonardo helicopters operated by Falcon Aviation which already include four light twin helicopters, comprising the Grand and GrandNew models, and two all new AW189 8.6 tonne helicopters deployed for longer range, higher capacity duties. The AW169 and AW189 models, used by Falcon Aviation, are part of Leonardo’s family of new generation helicopters that also includes the AW139. These helicopters all possess the same high-performance flight characteristics and safety features whilst sharing the same common cockpit concept and design philosophy. This approach facilitates synergies for operators of fleets across the 4 to 9 tonne weight categories in areas such as training, flight operations, maintenance and support. The combination of AW169 and AW189 offshore gives Falcon Aviation and its customer’s unmatched benefits in terms of efficiency, capability and safety.

Note to editors on the AW169 helicopter

A versatile, new generation twin engine light intermediate category helicopter, the AgustaWestland AW169 of Leonardo has been designed in response to the growing market demand for an aircraft that delivers high performance, meets all the latest safety standards and has multi-role capabilities. The first all new aircraft in its weight category to enter the market in more than 30 years, the AW169 can comfortably accommodate up to ten passengers in its large, unobstructed cabin, fitted with a range of customized equipment and entertainment systems. The type incorporates several new technology features in the rotor system, engines, avionics, transmission and electric power generation and distribution systems. Agreements for more than 150 AW169 helicopters have been signed with customers around the world to date, including orders and options, for a wide range of applications including offshore transport, executive/private transport, air ambulance, law enforcement and utility roles. Several AW169s have already been delivered worldwide for various roles.